You are here: Home / Blog / News / Preliminary Analysis of Notes on Debugging of Excavator Slewing Bearin...

The debugging of the excavator slewing bearing generally refers to the debugging of the backlash between the output gear of the slewing reducer and the ring gear of the slewing bearing. The proper adjustment of the inter-gear yard not only ensures that the pinion gear and the large gear do not gnaw and cut each other, but also ensures that the excavator rotates and brakes smoothly. Under normal circumstances, the eccentric distance between the center of the pinion and the installation and positioning center of the rotary reducer is used, and the center distance between the pinion and the large gear is changed by rotating the rotary reducer, thereby changing the tooth side clearance of the gnawing gear to debug the rotary mechanism. 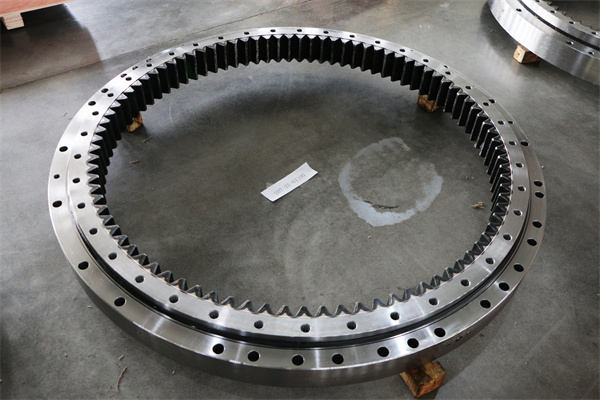 Since the sway of the excavator’s slewing brake is caused by the slewing reducer, the operator often mistakenly thinks it is caused by too large backlash, so he tries to adjust the backlash by rotating the slewing reducer. After the rotary reducer rotated a screw hole position, it was found that the debugging results were not satisfactory, and then another screw hole position was rotated.

1. Before debugging the slewing bearing mechanism of the excavator, it is necessary to identify the gear teeth with large radial full runout of the pitch circle of the gear on the large gear and the direction of the midpoint of the pinion of the slewing reducer.

How to identify the quality of crossed roller bearings?