The double-row ball slewing bearing is called “mechanical joint” in the machinery industry. It is the primitive mechanical transmission necessary for relative rotation between two objects, and can bear axial force, radial force and overturning moment.

The raceways of the double-row spherical slewing ring are surface induction hardened, and the hardening hardness ensures that the depth of the hardened layer can be reached under HRC55 to 62.

Due to the need for transmission, the double-row ball slewing ring is usually made of one of the rings. The heat treatment state of the gear is usually normal or quenched and tempered. The tooth surface can also be quenched according to user requirements, and the quenching hardness is HRC50~60, which can ensure sufficient depth. According to different applications, gear quenching can be divided into full-tooth quenching and single-tooth induction quenching. Single tooth induction hardening can be divided into tooth surface tooth root quenching and tooth surface quenching. 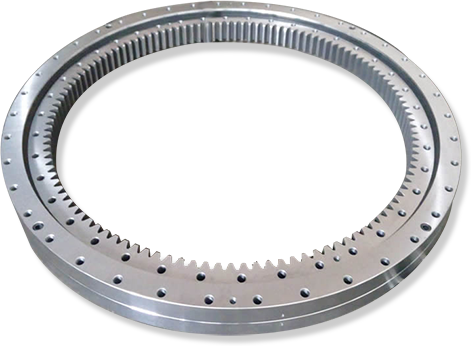 The size of the double-row ball slewing bearing is relatively large, usually 0.2-10 meters in diameter, and some can even reach 40 meters.

In the manufacturing process such as materials and heat treatment, double row ball slewing bearings and rolling bearings are also very different.

Generally, the double-row ball slewing bearing has a gear ring for rotating drive and a sealing device for dust prevention.

The installation method of the double-row ball slewing bearing is different. It is not like ordinary spindle bearings, but installed in the bearing box, but fixed in the upper and lower bearings by screws.

The double-row ball type slewing ring is also called “slewing ring” because its shape is similar to that of a plate, so it can bear the comprehensive load of a large bearing. It can also withstand greater axial loads, radial loads and overturning moments. Used in combination with ordinary bearings. Use function. Usually suitable for bearing huge overturning moment and relative rotation of mechanical equipment. It is an efficient and high load bearing combined bearing.